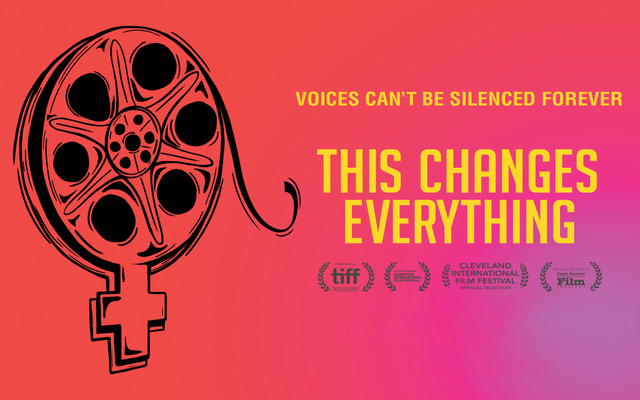 Join us on July 25 for a special screening of Tom Donahue’s upcoming documentary “This Changes Everything.” A discussion with Donahue, executive producer Geena Davis, Catherine Hardwicke and Kimberly Peirce, moderated by screenwriter/journalist Devra Maza will follow the screening.

This event is exclusive for Press Club members. Seats are limited. Please email info@LAPressClub.org to RSVP. Write THIS CHANGES EVERYTHING in the subject line. You will receive a confirmation email if a seat is available.

RSVP REQUIRED: Email info@LAPressClub.org, write THIS CHANGES EVERYTHING in the subject line. RSVP must be received NO LATER THAN Monday, July 22. The L.A. Press Club will send out a confirmation by end of Tuesday, July 23.

The documentary will open in New York and Los Angeles in August.

The gender gap has become an urgent topic in recent years. But even the most jaded viewers will be taken aback by the film’s compelling evidence and anecdotes. Filmmaker Tom Donahue has a long investment in chronicling Hollywood’s gender bias. His commitment signifies that righting the gender gap isn’t a job that falls only to women. “Progress will happen when men take a stand,” Streep says in the film.

Even those who consider themselves informed on this topic will find fresh revelations. Fighting for change isn’t new. The film covers critical feminist filmmaker uprisings in the 1960s and ’80s that were quelled by the status quo. Today, power dynamics are shifting as voices of dissent get louder. In the film, women testify candidly to their experiences of sexism and harassment. “When I think I’m acting, it’s really [the camera] panning across my ass,” says Rose McGowan.

As the film makes plain, Hollywood has been a powerful force in shaping negative gender roles for over a century. Now, the industry can play a positive role in recasting those roles for a better future.

One Thought to ““THIS CHANGES EVERYTHING” Film Screening and Panel”