HOLLYWOOD, CA: The Los Angeles Press Club is proud to announce that music legend Quincy Jones will accept the Visionary Award at a gala celebration on November 23 at the Biltmore Hotel, downtown Los Angeles.

The Visionary Award was instituted two years ago to honor an individual within the Entertainment Industry who uses their high-profile status to make the world a better place and to spread information about issues of freedom and importance. 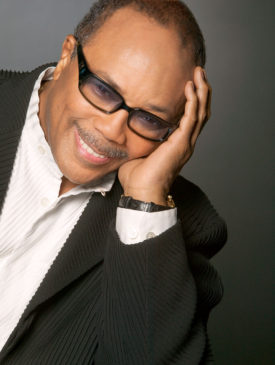 Quincy Jones pioneered the model of using celebrity to raise money and awareness for a cause with “We Are the World.” The song remains the best-selling single of all-time, and raised more than $63 Million for Ethiopian famine relief. More importantly, however, it shined a spotlight on the Ethiopian drought and U.S. Government responded with over $800 million in aid.

The Los Angeles Press Club has a long and storied history as one of the oldest and most prestigious journalist organizations in the country. We stand as an organization devoted to improving the spirit of journalism and journalists, raising the industry’s standards, strengthening its integrity and improving its reputation all for the benefit of the community at large. Serving the Southland since 1913, it is the only Southern California journalism group that speaks for all journalists working for daily and weekly newspapers, radio & TV, magazines, documentary films and online.

The NEJ Visionary Award is “Given by the Los Angeles Press Club at the National Entertainment Journalism Awards to an individual within the Entertainment Industry who has used their high-profile status to make the world a better place and spread information about issues of freedom and importance.” Jane Fonda was the first recipient of The Visionary Award for her creation of the “I Am Your Child Foundation” and co-founding of the American Foundation for Equal Rights. Forest Whitaker was honored last year for his founding of PeaceEarth Foundation.

The Los Angeles Press Club established the NAEJ awards in 2008 to recognize the quality journalism being produced in the fastest growing segment in modern media. It remains the sole award of its kind in the nation.

For more information, to buy tickets, advertise or to sponsor the event contact LAPC executive director Diana Ljungaeus at Diana[at]LApressclub.org or call 323.669.8081.