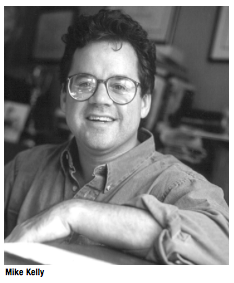 Editor and reporter Michael Kelly will posthumously receive the Daniel Pearl Award for Courage and Integrity in Journalism in a June 21 ceremony at the Southern California Journalism Awards.

Working for the Atlantic Monthly and as a syndicated columnist for The Washington Post, Kelly was killed in Iraq on April 4. He had been riding in a communications Humvee just out- side Baghdad when the vehicle came under fire from Iraqi forces. It swerved off an embankment and into a canal, killing him and an American serviceman, Staff Sergeant Wilbert Davis.

Kelly was just 46 and is survived by his wife, Madelyn, and two young sons, Tom and Jack.

Kelly is the second recipient of this honor. The Pearl Award was created in 2002 by the Los Angeles Press Club Board of Directors in honor of slain Wall Street Journal reporter

Daniel Pearl, who lived for many years in the San Fernando Valley. The Press Club selects the recipient each year in close consultation with the Pearl family.

Kelly enjoyed a highly successful career in newspaper and magazine journalism. He was editor of The New Republic, the National Journal and The Atlantic Monthly, whose turn- around and renewed recognition is largely cred- ited to Kelly. He also enjoyed a stint as a writer for The New Yorker. Most recently, he was an editor-at-large for The Atlantic Monthly— reporting on an array of national topics—when he left the comforts of the profession to cover the all but inevitable war in Iraq as an embed- ded journalists. He wrote dispatches for both the magazine and the Post.

The son of two journalists, he grew up on Washington’s Capitol Hill and eventually estab- lished himself as a skilled political reporter, cov-

Kelly went to the Iraq war as an experienced war correspondent. He had covered conflicts in Bosnia and, earlier, the first Gulf War in Kuwait. After the Gulf War, he wrote a stirring, prizewin- ning book on of the conflict, “Martyrs’ Day.”

In his columns, Kelly did not avoid express- ing his opinions, however controversial. He sup- ported the war in Iraq, for example, writing, “I understand why some dislike the idea, and fear the ramifications of America as a liberator. But I do not understand why they do not see that anything is better than life with your face under the boot.”

Kelly is not being honored for his views, but for the integrity he had to express them. Ultimately he risked his own life to observe, report, and practice his life’s work. As the editors of The Atlantic Monthly wrote in their eulogy to Kelly, “Many readers of his columns and articles disagreed

strongly with his views, but no one could doubt that Mike’s convictions were rooted in principle and firmly held. He enjoyed the game of reporting, the camaraderie and the chase, but he was always conscious of a high- er public purpose.”