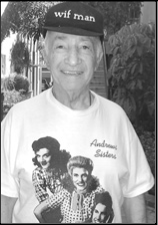 Longtime club member Nicholas Royce, whose career as a professional dancer is legend, has been honored by U.S. Congresswoman Diane Watson and U.S. Senator Dianne Feinstein for his activism in entertainment industry philanthropies and his efforts on behalf of the Greek Orthodox Church.

Royce, 77, who danced on the Milton Berle, Ed Sullivan and Kate Smith television shows during the 1950s, has spent most of his adult life “kicking” — both on and off-stage — for humanitarian causes. The son of Greek immigrants, as a young kid in Baltimore he had his heart set on becoming a dancer. He was 14 when he made his show business debut at the Lord Baltimore Hotel.

Following high school, he joined the U.S. Army
and entertained GIs in base hospitals here and in
Japan immediately after World War II. “ They called
me the ‘Greek Fred Astaire,’ “ he said with a chuck-
le. “It was there that I discovered the U.S. Military limited religious choices to Catholic, Jewish and Protestant. There were no Greek Orthodox chaplains.”

Although Royce is quick to point out that he never refers to him- self as a Greek-American, he has been a dedicated champion of his church. “I’m an American of Greek heritage,” he said. “My parents always told me, ‘You must assimilate. Otherwise, you will wind up educating others instead of their educating you.’ “

The wisdom of that early advice inspired him to recruit Sen. Leverett Saltonstall of Massachusetts to introduce legislation author- izing that “dog tags” for all members of the armed services indicate their religious faith. The kicking paid off. Congress passed the bill rec- ognizing Eastern Orthodoxy in the military in 1955.

Ten years later, it was time to kick again. In 1965, following a visit to Turkey, Royce resolved to campaign for the return of Istanbul’s his- toric St. Sophia Cathedral to the Greek Orthodox Church. It became a mosque in 1453 and is now a museum. His ongoing appeal, “Orthodox Christian Cry for Help” has been taken to the United

Nations Human Rights Office in Geneva and to religious leaders around the world.

These accomplishments led Watson to honor him in her Los Angeles office in December, and Feinstein has entered Royce’s efforts into the Congressional Record.

“Nick is extraordinary, “ says the Rev. John Bacas, of L.A.’s St. Sophia Greek Orthodox Cathedral. “He treats his craft with the same passion that he has for his faith, propagating the truth for both.”

His longtime show biz friends concur. Comedienne Rosemarie said, “Nick knows his business and he is one of the most honest and decent men I’ve ever known.” His pal of 50-plus years Patty Andrews of the Andrews Sisters

describes him as, “the friend you want to hold onto forever.”
A resident of Los Angeles since 1957, Royce has also kicked some holes in the so-called glass ceiling of gender discrimination. He was one of the first gents to seek membership in Women in Film, the Hollywood Women’s Press Club and American Women in Radio and

TV.
Why? “Because all through my career, women have always been

He recalled how, in 1993, “although my left side was partially par- alyzed, I squeezed into a ‘Tootsie’ costume and danced the ‘Disability Boogie’ at Women in Film’s 20th anniversary gala.” He said with a shrug, “A dancer knows his body and its limitations. I just choreo- graphed the number without left turns. It brought down the house. Maybe that’s the story of my life. No left turns. Just keep kicking straight ahead.”