A Great Actor, An Even Better Person

For Press Club Visionary Award Recipient Forrest Whitaker, the Humanitarian Work is as Important as the Acting Accolades

Last August, dressed in a blue suit and blue tie, Forest Whitaker stood in the spot at the Lincoln Memorial where Martin Luther King, Jr. stood 50 years earlier to deliver his “I Have a Dream Speech.” Like King, Whitaker spoke to a crowd that had gathered at the base of the memorial.

“Today I want to celebrate those nameless individuals as we reflect on the last 50 years,” Whitaker said in his brief address. “And in doing so, I want you to recognize the hero that exists inside yourselves, to understand that every step you take around an unknown corner marks your bravery.”

President Obama, former President Bill Clinton, former President Jimmy Carter and Rep. John Lewis were among those who also spoke that day, but among the handful of celebrities who made remarks, Whitaker’s appearance was especially timely. Just weeks earlier, the film Lee Daniels’ The Butler had come out. The historic journey through the civil rights era, from the perspective of Whitaker’s character, White House butler Cecil Gaines, was an unexpected late summer hit. 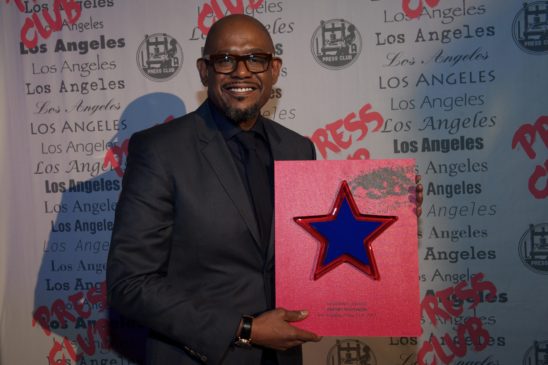 Whitaker is being recognized by the Los Angeles Press Club with its Visionary Award not only for raising the visibility of the real-life butler Eugene Allen and many other “nameless individuals,” but for his own humanitarian work that focuses on areas of the world that are often overlooked.

Whitaker’s PeaceEarth Foundation, launched last year, is designed to help those who may feel forgotten “share their stories with the world” via a digital platform intended to foster a dialog among communities. He’s the co-founder and co-chair of the International Institute for Peace, established at Rutgers University along with Aldo Civico and now affiliated with the United Nations Educational, Scientific and Cultural Organization (UNESCO). The Institute for Peace has a number of objectives, including youth conflict resolution. Whitaker was inspired by his experience growing up in South Central Los Angeles.

In 2011, Whitaker was named a UNESCO Ambassador for Peace and Reconciliation, with a special emphasis on initiatives to keep youth from “entering or remaining in cycles of violence.” In selecting him, UNESCO cited his work with Hope North Uganda, which provides refuge for orphans, child soldiers and others caught in conflict in that region of Africa. Whitaker saw parallels between the violence there and the gang violence of South Central, telling UNESCO, “you’ll hear the same stories all over the world in difference incarnations.”

Born in Texas, Whitaker, 52, is the son of an insurance salesman and special education teacher who moved the family to Southern California. He attended college on a football scholarship, but after an injury switched his major to music and even studied opera at USC as well as drama. One of his first film roles was in Fast Times at Ridgemont High. His breakout performance came in 1988 when he played the lead as Charlie Parker in Bird.

In 2006, Whitaker told New York magazine that following a career slump, he shifted his focus to finding roles that reflected “something that had to be said.” In the same interview, he talked of his own study of human behavior, which influences not just his acting but his philanthropic activity.

“I’m always trying to find a connecting factor with everything else and everyone else,” he said.

The Last King of Scotland, the 2006 film for which Whitaker won an Oscar playing Ugandan dictator Ida Amin, is one of his most memorable film roles, and Whitaker has supplemented that work by producing documentaries that focus on related issues. Among them is Kassim the Dream, the story of a Ugandan child soldier who became a world championship boxer. Others include Rising From Ashes, about Rwandan genocide survivors who compete in the Olympics, and Brick City, focusing on the inner city of Newark, N.J.

His transformation in his many varied roles is so substantial that in interviews, the questions tend to delve into which famous historic figure he would like to play in the near future. To GQ, he recently answered, “Frederick Douglass.”

The praise for Whitaker’s work even extends from one of Hollywood’s legends.

“He is one of the finest actors of our time,” said Sidney Poitier. “I have followed his career and seen how he finds a character in every role he plays.”

That was true with The Butler, in which Whitaker trained to set tables and serve food, but also researched the history of Allen’s life and persona, discovering one of the “silent heroes” he spoke about at the Lincoln Memorial.

As Whitaker pointed out in his August speech, that history is connected to the present, and it still matters. Noting the faces in vintage photos from the civil rights era, he told the crowd that day, “Many remain nameless but their heroic faces captured in so many portraits of the past remind us of their sacrifices. They risked their lives tirelessly to bring about change.

“This is your moment to join those silent heroes of the past, individuals who stood in the very spot where you stood today.”