Saudi Arabian writer and blogger Raif Badawi is the winner of the 2018 Daniel Pearl Award for Courage and Integrity in Journalism. Raif Badawi is currently serving a 10 year prison sentence plus 1,000 lashes for “insulting Islam” by promoting human rights and equal rights for women in Saudi Arabia on his blog. His sentence, if fully carried out, will most likely result in his death.

Raif Badawi’s wife Ensaf Haidar and his three children will travel to Los Angeles from their new home in Canada to accept the award on behalf of the Saudi Arabian prisoner.

“Freedom of speech is a cornerstone of our democracy and we must be vigilant, even with our allies, to make sure that imprisonment and torture are not used to stifle public discourse or discontent. That is why we are honoring Raif Badawi and his family and call for his immediate release,” said LA Press Club President Chris Palmeri, Bureau Chief at Bloomberg Los Angeles.

Ruth and Judea Pearl, co-founders of the Daniel Pearl Foundation, have seconded Palmeri's statement and added that “the Daniel Pearl Freedom of the Press Act, signed by President Barak Obama in 2010, was designed precisely to prevent such violation of journalists rights.”

The Los Angeles Press Club has sent an official letter to Crown Prince Mohammad bin Salman, pleading for Badawi’s release. We are hoping the Prince will take his reformism one step further and show the world that the modern Saudi Arabia believes in freedom of expression for all of its citizens.

Since 2002, the Los Angeles Press Club in conjunction with Judea and Ruth Pearl, the parents of slain Wall Street Journal correspondent Daniel Pearl, have bestowed the Daniel Pearl Award on brave journalists from around the globe.

The 2018 award will be presented by Judea Pearl at an Awards Gala Dinner at the Biltmore hotel in Los Angeles on Sunday, June 24th. Past recipients include Charlie Hebdo, Richard Engel, Anna Politkovskaya and Bob Woodruff.

The SoCal Gala is a fundraiser for this 501c3 charitable organization and makes it possible for us to run the club and fund our educational programming for the rest of the year.

To buy tickets, advertise or sponsor this event with a tax-deductible donation go to LAPressClub.org or contact Diana-AT-lapressclub.org.

LAPC is one of the oldest and most respected journalist organizations in the nation with a storied history of honoring the most celebrated reporters of the past century. In recent years the Los Angeles Press Club has continued to uphold its tradition of acknowledging excellence in spite of the fact that Journalism itself has been under attack and struggled in the face of ever declining budgets. 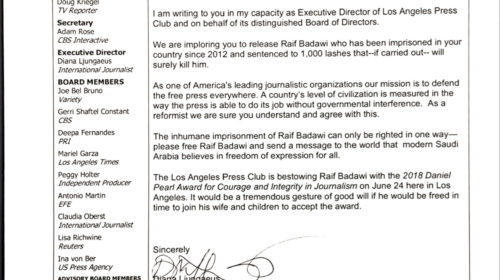 This is the official letter to Crown Prince Mohammad bin Salman pleading for Badawi’s release. We are hoping the Prince will take his reformism one step further and show the world that the modern Saudi Arabia believes in freedom of expression for all of its citizens.